So Westbury people should be happy about a prison five kilometres away because Deloraine doesn't mind Ashley four kilometres from their town? Comparing a maximum security prison complex of 270 inmates with a detention centre holding a handful of juveniles, is like comparing a watermelon with a grape, or a snake bite with a flea bite. Sorry, but they are really not the same.

I can't understand why any working-class person is in favour of Minister Elise Archer's prison. Prisons are a 19th century answer to a problem that they had with working classes getting uppity. Either hang 'em or imprison 'em! How many of today's prisons in Australia are home to any of the hugely rich bankers who commit millions of dollars in crimes that range from money laundering to arms sales? I'll tell you: none!

If you're wealthy, you can skip prison and just give the impression that you've lost your job and must leave the stage with suitcases of cash. It's time we realised that if we spent the money on lifting people out of poverty, provided adequate mental health programs and improved education then the 'lower classes' wouldn't need to revert to crime.

I don't deny that there'll always be a need to incarcerate some dangerous people, but seriously, look around the world and see where prisons are being closed, and why.

What a petty comment from State Growth Minister Michael Ferguson (The Examiner, June 20) when adding to the story about the proposed new prison. He said, "It would be fair to say that there would be some people in this state who would not support it anywhere".

I beg to differ and would argue not one person in Tasmania is against a new prison being built, somewhere. Those sorts of comments from a politician are just cheap shots at those who are opposed to this going ahead in their community.

Prison off the rails

The farce that continues around the proposed northern prison would be laughable if it wasn't for the clear demonstration that our leaders are totally without imagination. Certainly there's a need for finding jobs for people after this dreadful pandemic. But instead of building another warehouse for people who have broken the rules, how about something positive? How about a railway from Devonport to Hobart via Launceston, from the ferry to the capital?

It could be efficient steam or electric or diesel, but if we are to be the battery of the nation, perhaps electric would be the most efficient eventually. Sure there would be people who object, but don't we live in a democracy? They're not whingers or nay-sayers. They're concerned citizens, who supposedly live in a democracy with a right to state their opinion.

The whingers again at Westbury say the new proposed jail is still too close. I live at Glenorchy. Risdon Prison is a lot bloody closer to my house.

The vast majority of people in Lindisfarne and Glenorchy would have moved there after the prison, not had one imposed on them after they had settled in already.

Turn it up Westbury. A prison in your backyard is a badge of honour. Take it from a bloke who grew up in Risdon Vale through the late 1960s and 70s. I had a front-row seat of a jailbreak from the Pink Palace. Jobs jobs jobs! You'll be fine. 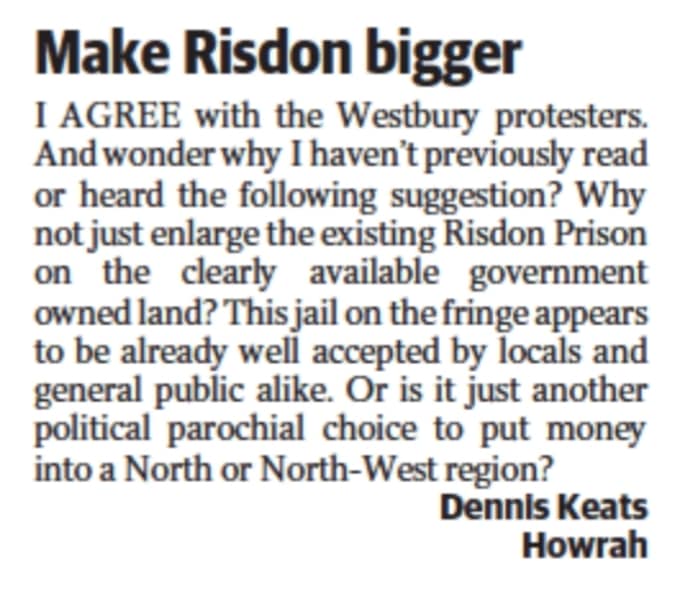 Two important stories were reported in recent days. One was youth mental health presentations at Royal Hobart Hospital doubling over the past three years. with $31,000 to fund research into this disturbing trend (Sunday Tasmanian. June 21).

The other was the saga of the site of the Westbury prison, where the State Government plans to incarcerate their expected increase of prisoners. The taxpayer will fund this maximum security prison to the tune of half a billion dollars, to be completed in 10 years. Mental health problems are a significant cause of increasing incarceration rates. It is not unreasonable to suggest some young Tasmanians now subject to the $31,000 research study will be incarcerated in the new prison.

How can we think this policy is justified? Do we not care about the future of these young people? It is not only the fault of our politicians who plan such inept and uncaring policies. It is all of us who do not insist that preventive strategies receive the same or more funding, compared to the building and management of unproductive prison infrastructure.

Here we go again. Same old stuff, different day. Absolutely predictable that the Greens and their ilk would immediately discover a bunch of conservation values on the new site for the Northern Regional Prison. Never mind that it is unallocated Crown reserve, which is encroached by gorse, extensively used for hunting, firewood collection and stock grazing, etc, for decades. Hardly pristine. Shades of the Greens' long-running and futile campaign against the construction of the hugely successful Meander Dam project.

Their entrenched ideological opposition to virtually any development will leave them forever stuck in their own political wildernesses.

I can't understand why any working-class person is in favour of the new prison. Prison is a 19th century answer to a problem that they had with working classes getting uppity. Either hang 'em or imprison 'em! How many of today's prisons in Australia are home to any of the hugely rich bankers who recently committed millions of crimes from money laundering to arms sales? None!

If you're wealthy, you can skip prison and just give the impression that you've lost your job and must leave the stage with suitcases of cash. If you are rich and have powerful friends, take Bronwyn Bishop for instance, then your transgressions might be rewarded by an Order of Australia. If we spent the money on lifting people out of poverty, adequate mental health programs and improved education then the so-called lower classes wouldn't need to revert to crime. I don't deny that there'll always be a need to incarcerate some dangerous people, but seriously, look around the world and see where prisons are closing, and ask why.

With so much of Tasmania denuded of forest and trees, does the proposed northern prison site have to be on a potentially high-conservation wooded parcel of land? If there is no suitable cleared Crown land, then surely purchase of private cleared and can be negotiated.

One prison, at Liawenee

In an effort to bring our prison system into a more manageable domain, may I suggest that the new prison that the government is so insistent on building be moved to a more central position, so that we have a single prison that is financially manageable and more able to be properly staffed. My suggestion is to eventually close down Risdon Prison and move all prisoner to a new site 60km south of Liawenee. On completion of the prison then work should immediately start on a new parliament house next door, so that for at least three months of the year we don't have to be aware of parliament or prison whilst they are snowed in. 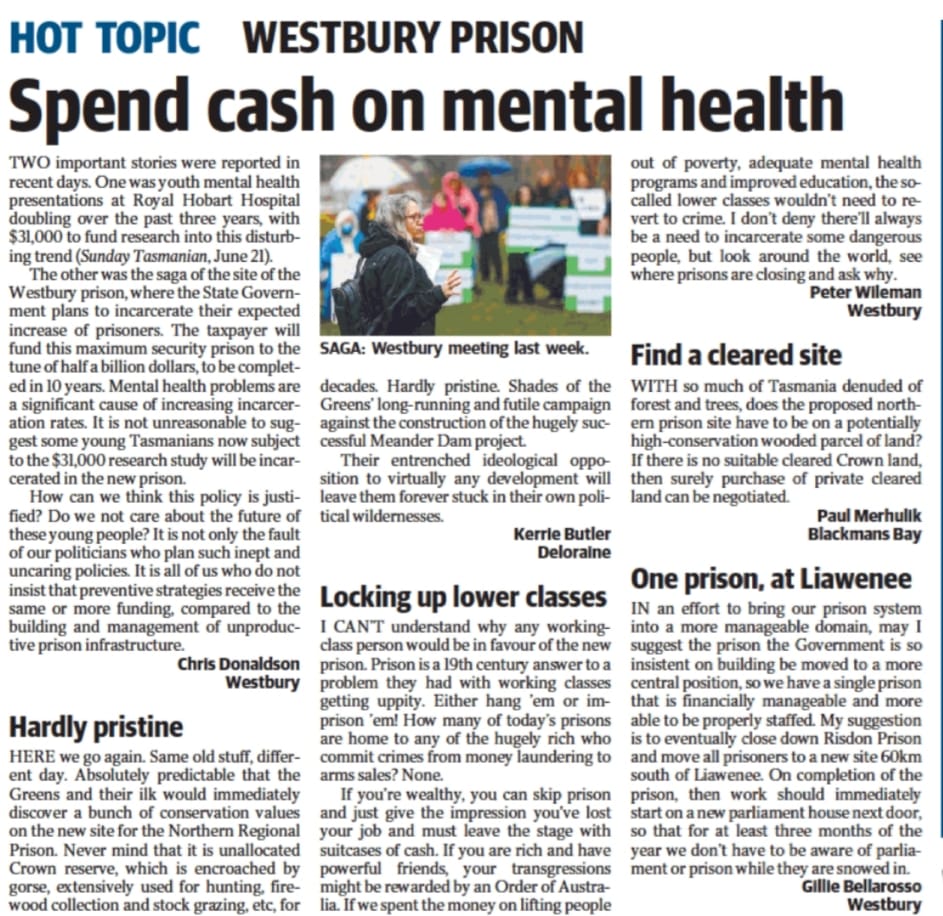 In the Queen's Crown bushland how might we protect her Australian botanical, zoological and even fungoid subjects from a fire that might arise in the prison.

Seriously, how much of the Westbury bush block will be intact and fully eco-operational after we clear, road, double fence, fire protect and illuminate this little gem.

Is the stamp on the Westbury deal even more viral and below social license than COVID-19?

So it's 'Westbury or bust'?

On January 24, 2020, Premier Peter Gutwein was quoted as saying "it's not Westbury or bust". Since then, it has come to light that in 2018, almost a full year before the EOI process had even begun for the Northern Regional Prison, the then Meander Valley Council general manager was in talks with the Department of Justice in an attempt to lock Westbury in as the site.

So it appears as though it has always been "Westbury or bust", it was Westbury on September 30, 2019, when Corrections Minister Elise Archer announced the "preferred site", it was Westbury on February 6 when the Premier visited the town, and it's still Westbury now. Just like the movie Groundhog Day, it seems as if the Liberal government is stuck in a loop where all they can see is Westbury, even when other (more suitable) options have been offered to them.

An observer of the prison saga in Westbury would rightly be puzzled at the Government's decision to move the prison just a little farther up the road from the former site after a torrid nine-month saga, to a new site with its own complications. Why is the obsession with Westbury so impossible to shake off?

Look closer and this was never a voluntary move by the Government designed to placate opponents of the prison as the Government would have us believe. Instead, it was an involuntary step backwards, designed to appease those fixated on the prison remaining close to Westbury. A masterclass in smoke and mirrors!

Anthony Galvin (The Examiner, June 29) thinks that a lot of councils in Tasmania would like it (a maximum security prison) built in their area.

That is exactly the point Mr Galvin.

There are no councils vying for the honour of hosting the prison. Not one.

So, if it's such a good thing, why would that be so. Please research by phoning any council north of Campbell Town to see if you can find a single council that is competing with the Meander Valley Council. You will be wasting your time, but it might make you wonder why Westbury has been singled out. 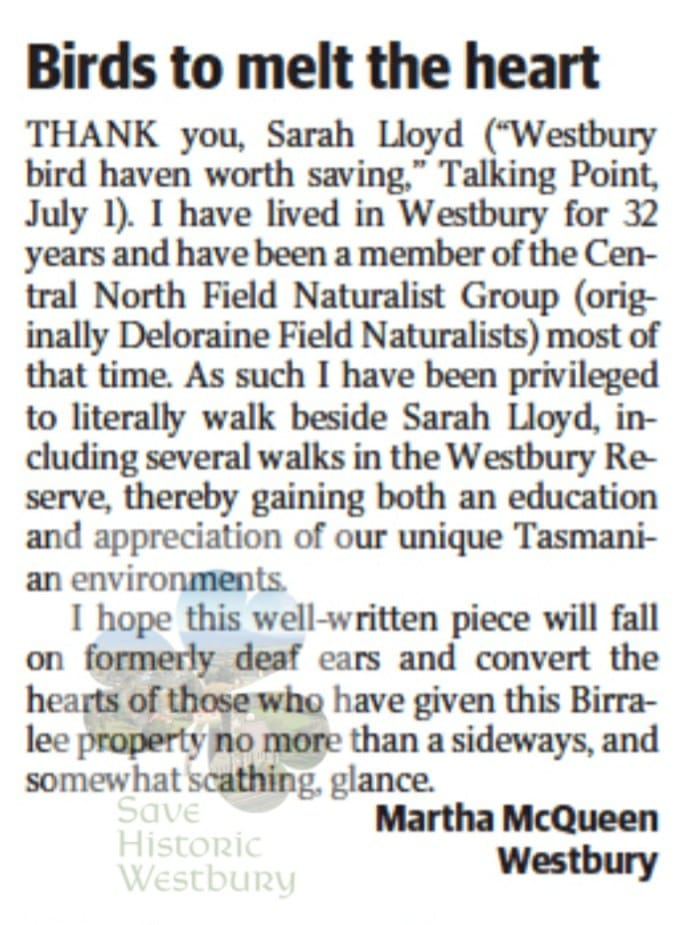 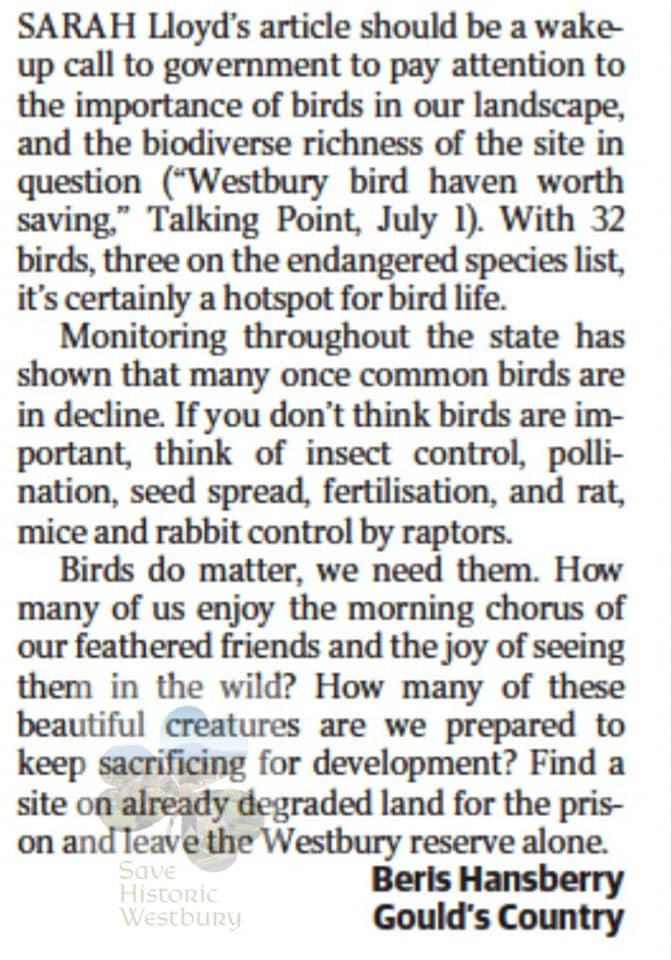 A round of applause for Elise Archer as she attempts to pull a conjuring trick of the most magnificent order. Her sleight of hand is on display as she uses the classic "we listened to the community" routine. This routine is designed to get the people least affected by the prison site relocation to believe the government cares for the people of Westbury and surrounds.

Once she has her audience on her side, without pausing, she showers them with sparkles such as a "$500 million economic boost" and "support 1000 jobs", giving them no time to realise that wherever in the Northern Region that the prison is built those same economic benefits and jobs will be available if we are to believe the biased "Social and Economic Impact Study".

The new "preferred" location, a huge 3 kilometres up the road, seems to have been chosen deliberately to antagonise, not only those in the community that opposed the original site but the Greens as well. As for the direct neighbours now affected by the nearer-to-Birralee location, once again, no empathy or concern shown by the government. In other words, "bad luck we are going to steam-roll it through".

The old chestnut, "Stupidity, is doing the same thing and expecting a different result", is clearly on display here as the government has failed to learn from the debacle it created in September last year. Rather than being open, transparent, and honest they are inviting failure by being secretive and manipulative.

An edited version of this letter was published in The Mercury on 6 July 2020.