Ever since the prison was announced for Brushy Rivulet reserve on Birralee Road near Westbury in June 2020, WRAP has repeatedly warned the Tasmanian and Federal Governments that we would actively campaign against their candidates in the State and Federal elections, unless the prison was moved away.

On 11 April 2022, we wrote directly to the latest Premier, Mr Jeremy Rockliff to advise him we would campaign against Liberal candidate, Ms Susie Bower, if the prison proposal was not removed from the reserve prior to the election. We offered to meet with him to discuss this, but he had no time to do so.

On 29 April 2022, we wrote to Minister Sussan Ley confirming that WRAP would campaign against Ms Bower if there was no decision to move the prison from the reserve prior to the Federal election. We did not receive any response.

As neither Liberal government would act, WRAP had no option but to organise advertisements to go into regional newspapers letting communities know the position Ms Bower had adopted on the prison, even though 80% of people in Westbury had been opposed to it. We also commenced letterboxing a leaflet which addressed the same issue.

Finally, after our campaign had begun, on Thursday 5 May 2022, the Tasmanian Government made the belated announcement that the prison would no longer be considered on the reserve.

WRAP immediately ceased its letterbox drop. Out of the 4 remaining advertisements scheduled for rural newspapers, WRAP had committed to 2. However, the following 2 have been PULLED because of the Government's welcome but BELATED announcement.

It is unfortunate that even though we gave them both notice nearly two years ago, neither the Tasmanian nor Federal Liberal Government took any notice of WRAP's notice that we would campaign against Ms Bower. We advised them of this repeatedly, with a last warning given before we commenced our campaign. Our emails were ignored.

If the announcement had been made sooner, none of the letterboxing and advertisements about Ms Bower would have been issued.

That aside WRAP stands by its statement that Ms Bower supported the prison despite strong, majority community opposition to it. This statement represents nothing more than the truth.

Ms Bower's position on the prison is emblematic of the increasingly common disconnect between the Government and its small communities.

We would really like to see this addressed in the upcoming election!

Don't forget how we have been treated and use your vote wisely!

For over two and a half years, WRAP has fought tirelessly against the senseless proposal to burden the small rural town of Westbury with the Northern Regional Prison. When our group incorporated to take this fight up to the Government, our campaign's catch cry was "Save Historic Westbury".

The decision to move the proposal away from the Westbury region brings an end to WRAP's campaign. The amenity and character of our town have been preserved, not just through our efforts but because the two sites we campaigned against were bottom of the barrel choices. This backflip on the prison mirrors the backflip on the Burnie Court. It shows that no good decisions are made in a hurry and without consultation.

This journey has been hard and divisive. But it has also been educational. Tasmanians have been sold a lie. Prisons do not keep our communities safer. They are a revolving door of misery which eventually spills out into the community.

The more prisons we build the more at risk we become. We have researched this in depth, and we know this.

We have learned that in order to keep us all safer, the focus of the criminal justice system must shift to rehabilitation, and away from punishment. And for this reason, we welcome the new ministerial title conferred upon Elise Archer MP (Minister for Corrections and Rehabilitation). It's one step towards rectifying this imbalance.

We sincerely hope that any Northern "correctional" facility proposed in future will have rehabilitation as its core focus, not punishment. We still doubt that the core needs of inmates and staff can be met by a facility in the middle of a bucolic community, far from essential services.

So, if the proposal for Ashley is for a retrograde "lock 'em up and throw away the key" facility, and the people of Deloraine and Exton oppose it, many of us here in Westbury will support them. 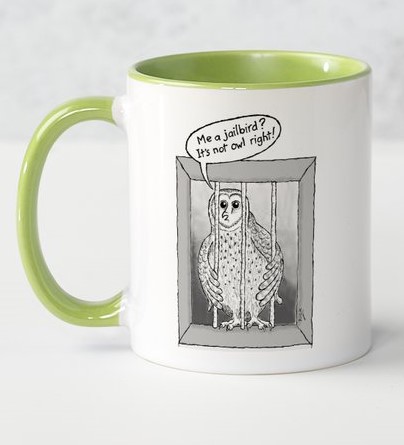 Souvenir mug - only a limited number are available to purchase.